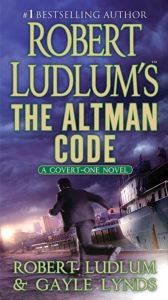 The Altman Code by Robert Ludlum

The Altman Code is Robert Ludlum’s fourth book in the immensely popular Covert One series.

A photographer is cruelly killed on the docks in Shanghai, China. His crime? He took photographs of a cargo ship being loaded. The film is destroyed.

The US navy secretly follow a ship mid-ocean – the ship is Chinese, the cargo – believed to be lethal. Aboard are believed to be enormous quantities of chemicals. Chemicals which could be used to create WMD! Weapons of Mass Destruction!

The US President has no intention of seeing these weapons reach rogue elements in the already volatile Middle East.

The situation is immensely delicate.

After years of wrangling with the Chinese, they are close to agreement over human rights negotiations. The President does not want to jeopardise this, or to create an international incident.

Jon Smith, of Covert One, is deployed to find the evidence to incriminate the Chinese vessel. However, vital evidence is lost and an agent is killed. The options are narrowing.

Jon Smith’s mission is imperative and dangerous. The smoke and mirrors hide deadly secrets going to the heart of the powers governing China.

The Altman Code by Robert Ludlum is a thrilling read, as you might expect.

This site uses Akismet to reduce spam. Learn how your comment data is processed.