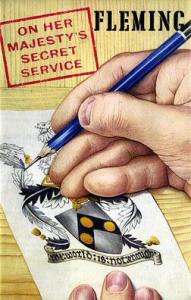 On her majestys secret service by ian fleming

Who could talk of a spy novel or thriller without mentioning one of the best writers in the genres, Ian Fleming.

On Her Majesty’s Secret Service by Ian Fleming is one of the most famous of his works.

James Bond, United Kingdom secret agent with a licence to kill, had been involved in hunting down the SPECTRE organisation and Ernst Stavro Blofeld, the boss. They had hijacked nuclear devices in order to blackmail the governments of the West. Bond had a disagreement with the British Secret Service in the running of the matter and he writes a letter of resignation to M, the head of the service.

Bond saves a beautiful Contessa by paying the gambling debt she cannot fulfil but they are captured by criminals. Her father is Marc-Ange Draco, the boss of the Unione Corse crime organisation.

Draco tells Bond that Blofeld is in Switzerland after which Bond returns to England to filter fact from fiction. The College of Arms in London discovers that Blofeld has taken on the persona of Comte Balthazar de Bleuville to mask his identity.

Bond pretends to be a member of the College of Arms, Sir Hilary Bray. He visits Blofeld face him and to ascertain his right to the title, finding that Blofeld has undergone surgery to cover up his identity.

Blofeld has been brainwashing women into carrying biological warfare agents to destroy the agricultural economy of the British Isles. Bond escapes by ski from Piz Gloria, as he believes he has been uncovered.  He is chased and kills some of his pursuers. Exhausted he reaches the local town where he is helped by the Contessa.

Draco’s Union Corse help Bond to attack Blofeld’s clinic. The clinic is destroyed and Blofeld escapes. Flying to Germany Bond marries the Contessa. They drive away on holiday only to be machine gunned by Blofelds team. Bonds new wife dies.

James Bond, otherwise known as 007, is probably the most famous spy to have worked on behalf of the Queen and the Union Jack flag.

A classic spy novel from one of the worlds finest writers. I am looking forward to the next film with Daniel Craig, No Time to Die. The Queen’s best agent and a real Made in England hero!.