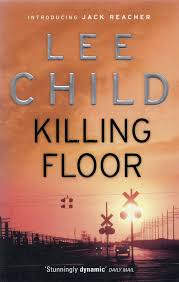 I decided to read the debut novel by Lee Child, Killing Floor, as I had heard so many people speak of this writer in good terms. I am glad I did. The book was utterly unputdownable….is that a word – who cares, it is certainly an experience!

Bieng a first novel it is all the more remarkable, very engaging and great character development.

Killing Floor follows the exploits of one Jack Reacher and it cuts straight to the action. Reacher is a wanderer and a former Major in the United States Army Military Police Corps.

He gets off a Greyhound bus and walks many miles into the town of Margrave in Georgia, USA. He is interested in the death of a musician named Blind Blake who died there many years before. In a diner, shortly after arriving he’s arrested for murder. He is interviewed by a detective called Finlay and he tries to prove he was not the murderer. A phone number is found in the dead man’s shoe and Finlay calls it and cons a man into telling him his name, that of a Mr. Hubble. Hubble is brought into the police station for questioning and he  cracks, confessing to the murder. Reacher, however, is sceptical. Reacher and Hubble are then sent to the state prison. Reacher averts an attempt on his life, which was intended for Hubble. two days later, Roscoe, a police woman to whom Reacher is attracted, proves……