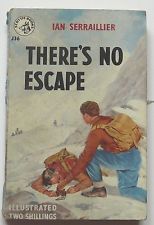 Theres no escape by Ian Serraillier

Ian Serraillier  was born on 24 September 1912 and died on 28 November 1994. He was a British novelist and also a poet. Probably best known for his children’s books, he also wrote novels for adults such as There’s no escape which was published in 1956. . He was born in London and in 1918 his father died in the flu pandemic when he was six years old. He went on to be educated at Brighton College and next took his degree at St Edmund Hall, Oxford and becoming an English teacher.  He was granted conscientious objector status in World War II because he was a Quaker. His first children’s novel was published in 1946 and was quickly followed by several more adventure stories. His best known work,

In There’s no escape Maclaren, who is the chief of secret agents, arranged to parachute Peter into war-torn Silvania (nominally an unspecified county in the Balkans), where he was tasked with rescuing  Dr Helpmann before the enemy caught him and extracted information about his new discoveries. Peter agreed to go reluctantly.

This is a fast-moving adventure story by Ian Serraillier, set in wartime Europe with a dark cloud hanging over it. The book is an easy read which has a taut plot featuring parachutes, inventions and secret codes. One of the first books I ever read and many times since, re-read.

This site uses Akismet to reduce spam. Learn how your comment data is processed.